The new, 2014 Ford F 150 Tonka is a big truck made with cooperation of Ford Motors and Tuscany Motor Company which produces custom made vehicles, under the license of Harsboro and it’s based in Elkhart, Indiana. This truck is largely influenced by the F 150 Lariat Crew Cab and Ford SuperCrew pickup with 4WD. This model was first time showed at the 106th Chicago Auto Show and since then became a big hit among SUV truck enthusiasts. 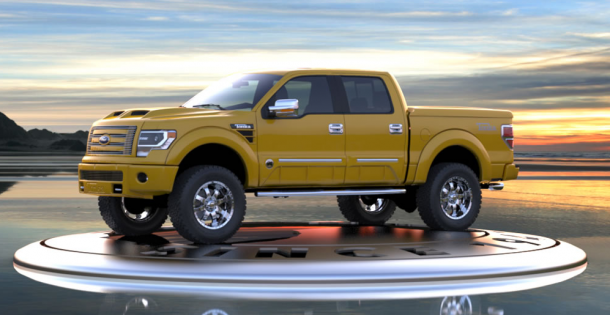 All the produced trucks are in bright yellow color which is like a trademark for this model. With this model it’s all about the looks. Is one of the biggest trucks out there and it’s as bulky and chunky as it gets. It can be bought only by rich enthusiasts who appreciate these kinds of vehicles.
Inside style is nice looking and comfortable at the same time it’s bed is finished with a hard tonneau cover and heavy-duty carpeting. Black is the dominant color. In premium trims it comes also with leather upholstery and 4,2 inch screen on the cluster, power moonroof and reverse sensing system which definitely comes handy when driving truck this big. Remote Start system is also an additional option highly useful in cold weather conditions. It rolls on custom 20-inch alloy wheels, with 325/60 BFGoodrich All-Terrain tires that can conquer even the roughest mountain terrain. From other outdoor features it’s important to mention its shock absorbers and 6 inch suspension lift. It also offers a maximum 9300,00 pounds of trailer weight.
The beast 5,0 liter V-8 can pull out 360 hp is placed under the hood. It’s also equipped with Quiet Tone exhaust system that makes this beast purr. Comes with automatic transmission in all trims.
http://youtu.be/JASwq_w1h3o

Only 500 of these vehicles will be made so you need to hurry up if you want to own one. Price goes around $73,000. The truck itself costs around $23,000 with additional $50,000 for the services of Toscany Motor Company which made this model so awesome. Price is obviously high, but when you think about what you get for that money, maybe it’s a bargain after all. 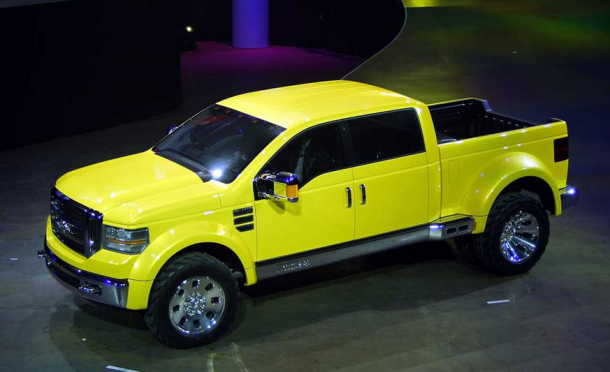 Driving this type of car is more a statement then a way to get yourself from point A to the point B and according to that, the price is formed so only a few of lucky bastards can show off with this incredible machine. Definitely a collection item and definitely a thing you should have if you are up to the challenge.